One Story Class Review: Become Your Own Best Editor 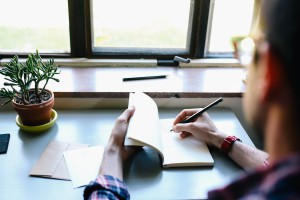 Years ago an old boyfriend told me a story about Flaubert and the comma which goes like this: Flaubert was editing the final copy of a story one morning. He had already revised the story many times, re-writing large sections of it. That morning he went through the story again and removed one comma, only one. Later he went for a walk in the garden, had lunch, called on friends but the whole time he was distracted. Should he really have taken out the comma? Just before dinner, he went to his desk and put it back in.

The guy who told my boyfriend this story thought it was hilarious. “Imagine being that obsessed about a stupid comma.” But my boyfriend, a writer himself, didn’t find it funny at all.“ That’s what I hate about writing,” he said.

At the time I had just started writing seriously and I definitely agreed with him. But now, a good fifteen years down the road, I’ve realized that’s exactly what I love about it. Although I can barely draw a stick figure, for me, writing fiction feels like painting: the intial idea is a sketch, flat and hastily drawn in charcoal. Each revision brings out more detail, more color, more depth, more contrast. Sometimes I write in acrylic: the revision and editing flows with ease, the story takes shape and changes so fast I can barely keep up with it. But others times I write in oil: I need time, to put the story away until I can see if more clearly. If I rushed the edits, the paint would smear, the structure disappear, the story be out of my reach. And so I wait.

But although I like the process of revising, rewriting, reshaping, it still is a lonely business no one can learn exclusively on their own. I do most of my writing in cafes so at least have the illusion I’m connecting with other people.

Because of this, I’m always looking for ways to be involved with other people, to learn and gain a perspective outside of myself  about writing and the writing process. That’s why I decided to enroll in the course Become Your Own Best Editor at One Story.

To be honest, I’d seen the course advertised several times before, but I never signed up. For one, I feel confident in my own editing skills. Besides writing, I also work as a translator and taught EFL for years, which means I know my way around English grammar and am used to tuning into nitpicky details a less trained eye might overlook. Also, the course costs $60—not a ton of money, but enough to make me want to be sure I would really get something out of it.

Still, like I mentioned before, I strongly believe no man is an island. I wanted to take a course where I could talk about writing and interact with other people, even if the interaction was only virtual. So, about a month ago, I decided to give the course a shot.

The course is structured around a short story called The Remains, which was written by Laura Spence-Ash. Our first assignment was to read the unedited version of the story as it was sent to One Story and think about any changes we would make. Although the story was definitely flawed—some details didn’t seem believable, there were a few flat characters and a fair amount of awkward language—I liked it a lot and could see why they had chosen it. Still, I thought it was a good idea Will Allison also added a disclaimer stating whether or not you like the story is beside the point; if you don’t, you can still learn a lot from the editing process. This way if the story didn’t resonate with any of the readers, they still had the feeling they should hang in there.

The next day Will offered a summary of different kinds of editing: copy editing, line editing and content editing. We read the first edited draft of the story with notes by both Will and Hannah Tinti. A lot of the edits they made language-wise were things I would also have thought of (deleting redundant and unnecessary words, avoiding the passive voice and auxilary verbs, etc.), but definitely still good reminders. What I really found helpful and interesting was their content editing. It reminded me how important it is to create a believable world, to not add plot twists merely for the sake of convenience and to always do the necessary research.

Over the next few days we read the revisions Laura made, the next batch of edits, the second revision and so on until we got to the final draft. Not only was it great to watch the story develop, it was inspiring to see how much work the editors at One Story put into making this happen. I truly believe a good editor can be a writer’s best friend. They can see inconsistencies and weaknesses writers themselves are blind to. The final version of the work becomes a collaborative effort. But, since publishing fiction is so incredibly competitive, I always assumed editors only ever choose to publish work so close to perfect, little editing actually has to be done. I found it inspring that Will and Hannah chose a flawed story they felt was a diamond in a rough. Together with Laura, they were really able to make it shine—in my opinion, exactly how it should be.

To help make the course more interactive, several forums were created each day where you could, for example, exchange writing advice, give your opinion on the story and edits or ask questions to Laura or Will. I also got the e-mail address of another woman on the course and we sent each other drafts of a story we were having trouble with. She gave me some really good insight and I think she also found my edits and comments helpful. A week or two letter, the content edits mentioned made me better see a major weakness in one of my stories I had ignored for a long time.

Anyway, to make a long story short (opps, too late), I really enjoyed the course and got a lot of it. I highly recommend it to any writer, whether they’re just starting out or are more of an old hand.