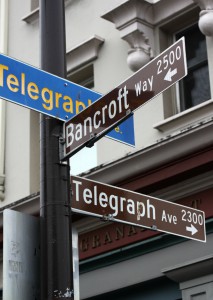 be I’m exaggerating. But between the ages of 13 and 25, Telegraph Avenue was one of the most important places in my world. In my teens, I was on Telegraph at least twice a week, making a pilgrimage to Cody’s or Moe’s or standing in line at Fat Slice only to have the lead singer of the Counting Crows snatch up the last slice of vegetarian pizza right in front of me (true story). I drank my first cup of coffee at a cafe, long gone, on Durant Avenue across from Yogurt Park. Alright, I admit it: it was actually a mocha with a shit load of whipped cream on top. But still, a milestone.

I came for church at First Presbyterian Church of Berkeley around the block (Sundays for sermons, Wednesdays for choir) and yes, for most of that time I was as they say invested in my “personal relationship 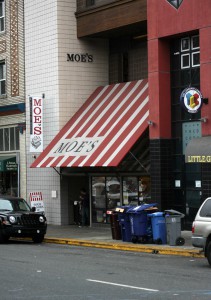 with the Lord.” But even when I eventually slipped into agnosticism, as most lapsed Christians do, the street still had an almost spiritual significance. I wrote about it in an essay I just finished called “With Love From A Berkeley Girl,” which I’ve sent off to a couple of places to see if I can get it published.

For years after I’d moved to Germany, I often had a reoccuring dream. In the dream I’d be in my neighborhood in Berlin doing something normal, like grocery shopping or walking to the U-Bahn station, when suddenly I’d be on Telegraph at the corner of Bancroft.

How did I get to California so quickly? Has anybody noticed? Is anyone worried?

Soon I was happy and relieved I managed to get there instantaneously instead of needing the usual grueling 15 hours.

It must be magic. 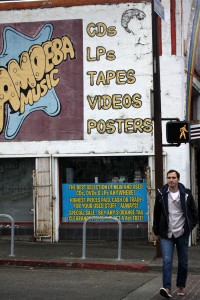 In one dream I went to a cheesy Greek restaurant with fake Parthenon pillars up near International House. This place is so not really on Bancroft, I told myself as they delivered me my Ouzo. Another time I was trying to get into a gourmet, hipster pierogi shop (also not really there), but everytime I went inside, the lights would turn off and everyone would disappear.

In the dreams I was always looking for my mother; but I could never find her.

When I did actually get on an airplane and head out to California, for a long time Telegraph was one of the first places I went to. I’d go browsing at Moe’s and Amoeba or do some writing at Cafe Med or Milano, still sometimes zonked out from jetlag. For lunch, I’d eat a burrito at Zona Rosa (now gone) or, if I was feeling fancy, go to the Drunken Boat further up the road.

But in my early 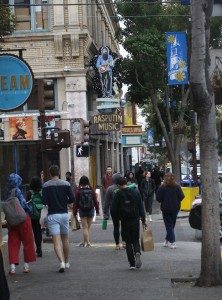 30s something changed. Many of the shops and restaurants I remembered on Telegraph were gone and most of the people on the street were at least a decade younger than I was. Whenever I went there, part of me wondered why I’d come.

From then on whenever I was visiting I’d still make my way over to Berkeley at some point. I’d go to Tilden or La Notte or Venus or Shattuck Cinema. But Telegraph was no longer on the list.

The street also stopped coming up in my dreams. 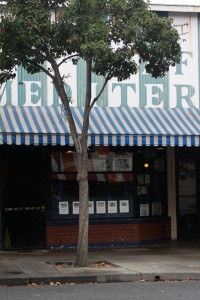 When I went to Cali a few weeks ago to visit my family, I decided to take a jaunt down Telegraph Avenue—
the first time in over eight years. The street is different, but also the same, just somewhat faded. At 42, I’ve now entered professor-age, so I’m sure I blended right in.

But seriously: without Telegraph, I’m not even sure I’d be in Berlin. Telegraph Avenue, its haunts, its side streets, its people truly made an impact on my life.

So Telegraph, old pal, here’s to you and thanks a bunch.