When I was 35, I opened up an online vintage clothing store. Although I sold a lot of dirndls, I also had plenty of other stuff from the 40s to the early 80s. I could have easily found clothes from the later 80s and 90s and charged jacked up prices to hipsters the world over, but I just couldn’t do it. Why? Because a) selling a sweater I might have actually worn in the 7th grade felt very wrong and b) the 90s are vintage? Really?? 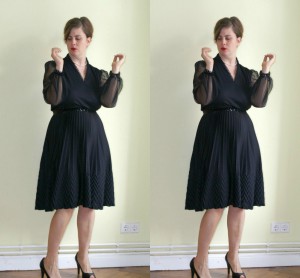 I started running the shop in our apartment, but my husband soon started to complain about the clothes I was stuffing everywhere. I’m a clothes horse myself and am admittedly not the neatest person, and I didn’t really want musty thrift store finds to start putting a damper on my marriage. So I rented a small room in the basement of a juggling shop on Zossnerstrasse where I stored the clothes and set up a photo studio. To get to my room, I had to walk through a practice space where clowns were often going through their routines. Here’s what I learned: Underneath all that make-up, clowns are actually super hot. Seriously. Apparently, it takes a lean, toned body to do all that juggling, squeezing into tiny cars and falling on cue.

My poses were a little theatrical at times, but it should come as no surprise since I studied classical singing, i.e., opera. My stint in opera is worth another post at another time, but I will tell you this: I have a rare voice type, a big, dramatic mezzo soprano, nearly a contralto, which meant every time I opened my mouth to sing, someone was pressuring me to pursue a career.

My last teacher Blanche Thebom raised the bar from pressure to mind fuck by telling me things like I “owed it to god” to sing and if I didn’t become a professional opera singer I would “want to kill myself in 15 years.” I loved to sing. I really did. But if you want to become a professional opera singer, opera has to be your entire world. If you want to have ham sandwich for lunch, you have to ask yourself, “How will this ham sandwich further my opera career?” I’m not exaggerating. For me, with opera, the ambition just wasn’t there.

I can’t say the same about writing. Although I’ve been writing as long as I can remember, I got serious about it after I moved to Berlin. In 2001, two years after I’d moved there, I applied for MFA writing programs in San Francisco and Tucson and didn’t get into either of them. I was upset of course, but the rejection also didn’t crush me. Someday at a reading I would be asked why I never got an MFA and I would say, “Actually, I applied for two programs and didn’t get in,” which would sound all the cooler. I wrote all the time, got feedback, wasn’t thin skinned about criticism. I believed in my talent, but was still humble enough to know I had a lot to learn. Still, when it comes down to it, writing is a whole lot of work and mostly you do that work alone. For a long time—possibly forever—no one else gives a damn. And I admit it: this wore me down.

I’ve always hated phrases like “only write if you have to.” I mean, seriously. What is that even supposed to mean? I didn’t “have to” write. Writing wasn’t holding a gun to my head saying “scribble words onto that page or else.” So I made the decision: At 35, when my vintage shop opened it virtual doors, I gave up on writing. No more Miss Wordsmith. I’m washing my hands of it. I’ve always been a passionate thrifter, my main motto “it ain’t right if it isn’t second hand.” Why not focus on this side of myself and build a little business? 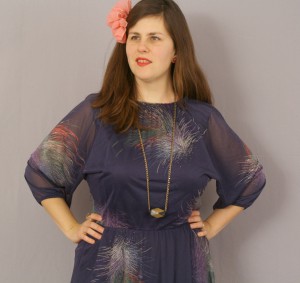 Although I did make money running the shop, there wasn’t too much left after I’d paid my overhead. With all the shopping, picture taking, listing, packing and shipping, it was also a ton of work. But I could have still kept with it. My business might have grown steadily over time. The trouble was, I was starting to get bored. Say what you want about writing, it never bored me. Four years after I opened my shop, I closed it down for good.

I didn’t start writing again until 2015, which means a break of nearly six years. But now I think a break is exactly what I needed. My writing is so much freer now. When I was writing before the break, I was putting so much opera-career-pursuing pressure on myself all the time, basically setting myself up to fail. These days when I write, I’m doing it because I want to; I’m doing it for myself. 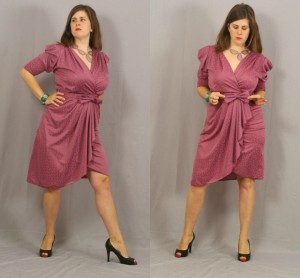 Still, me being me, I can’t help but think at least a little bit ahead. I’ve started working on a novel and if I ever manage to get it published, I’d like to use one of the photographs I’ve posted here for my author pic. If I have my way, I’ll choose the picture up above—how can one not love the magnificent hideousness of lilac rayon and bows? But if my publisher insists, I might be willing to compromise and let them choose another. Maybe I’ll even let them use their photo altering powers to add in bookish glasses and a modest blouse. Like so many writers before me, I will place my youthful picture on the dust jackets of my books for many decades to come. When my fans come to readings, they will at first be confused when I walk up to the podium with gray hair and orthropedic shoes. Rebeccah Dean: famous writer and forever 35.

Am I still afraid I’ll never get published? Am I still worried no one will ever care? Of course I am. But when I die someday, my guardian angel is going to greet me in his long white rob and Prince Valiant hair cut. Since I’m pretty sure all angels hail from California, he’s going to ask me: “Did you follow your bliss?”

“Well, Mr Angel sir, it wasn’t always easy, but I tried to do the things some part of me was scared of as often as I could.”