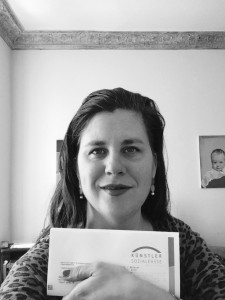 Have I ever told you how much I fucking love Germany? As I watch my country be ripped apart by unbridled neo-liberal heartlessness, cynicism turned reality and sometimes downright unhinged psychosis—and yes, this makes me angry, but mostly it just breaks my heart—I appreciate my adopted country Germany all the more.

Germany’s social welfare system already gave me free university. It gave me Elterngeld (parents’ money) the two years I stayed home when my daughters were small. It gave me affordable, full-time childcare which was absolutely free once my daughters turned three. It gives me 364 euros a month Kindergeld (childrens’ money) to help cover child-related costs, an amount I’ll receive until my daughters graduate from college.

Public transportation, theatres, museums, the symphony and opera houses are all reasonably priced thanks to state subsidies.

Although Berlin is still affordable, rent prices have really gone up a lot in the past 8 to 10 years, and in my neighborhood Kreuzberg we’ve had our share of typical gentrification problems. But even here, citizens aren’t always just thrown to the wolves like they were when I left the Bay Area in 1999, when the “Dotcom Bubble” was still known as the “Dotcom Revolution”. Some measures have been put in place to help preserve the flair, diversity and affordability of neighborhoods. When they talked about turning the old Tempelhof Airport over to developers once it closed, the people fought to keep it an open public green space—and the people won.

But now, drum roll please. I have been awarded the granddaddy of all German social welfare programs: membership in the Künstlersozialkasse, also known as the KSK.

Here’s the lowdown on the KSK:

Back in good old 1983, the German government noticed that self-employed artists, musicians, writers and anyone in publishing is likely to be, well, poor. Because Germany in general has a well-developed social consciousness—especially compared to the U.S. even pre-Trumplandia—and in general wants to help people avoid falling into poverty in old age, they decided to create a government-run social insurance scheme for artisits.

There are three categories of professions who, by law, must be insured by the KSK if they meet the requirements:

(Teaching any of these disciplines also counts)

And your career in any of these fields can be a “career” as far as the KSK is concerned: to qualify, you only need to make a minimum of 3,900 euros a year in any of these categories. Once in, the government basically acts as your employer, covering half your pension and health insurance costs. They get some of this money back by taxing any company that hires freelance artists, etc. insured by the KSK.

Your KSK payments depend on your income and you can still earn 5400 euros a year doing any sort of “non-KSK” freelance work.

Although the KSK is required by law to cover anyone who meets these requirements, they still do so very reluctantly (it is a very expensive program, after all). When you send it your application, they first look if there is any way they could possibly reject you. In a lot of cases, it’s not a bad idea to pay a lawyer specializing in KSK enrollment to help you with the application process to make sure they don’t find some way to say no.

The lawyers don’t charge much, about 100 euros I heard, but I decided to apply myself first and only contact one if I was rejected (and yes, you can’t fight it if they say no.) Right now, I earn my money with freelance writing, copywriting, editing and translating. Perfect for the KSK, right? Not exactly.

Although freelance editing and translating are listed as KSK eligible professions, you still have to prove that you had a lot of creative room for interpretation, otherwise your work will be reduced to a “craft” and not an “art”, which makes you ineligible for the KSK. They are very picky about this, usually only recognizing literature translators and editors from publishing houses or established newspapers and magazines (and you have to have multiple employers, otherwise you are “Scheinselbstständig,” which translates as “fake freelance,” and the KSK will refuse to cover you). On my application I wrote that I earn my money the four ways mentioned above, but that my main income comes from freelance writing and copywriting.

A couple of weeks later I got a letter in the mail saying they needed to know “a little more” about the kind of translating I was doing, including invoices from different clients. Well aware that they were trying to trip me up here, I sent a few more invoices along with a letter telling them I’m gradually reducing my translation work and may give it up altogether in the future. I also listed my estimated earnings for the year, which was under the 5,400 euro limit (btw, this is also true. Lie to the KSK, and you could get a serious fine, which is why I waited until now to apply so I could be completely honest about how I earn my income.)

Two weeks later I got the letter and now I’m in!

Is it fair? Not really. When I was a freelance EFL teacher, the conditions were terrible, and no help there. But hey, I’m not complaining. Now all I need to do is add “fiction writer” to my actual income list and I’ll be a happy camper indeed. 😉